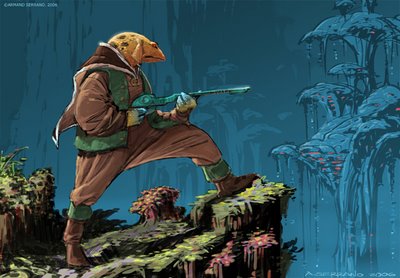 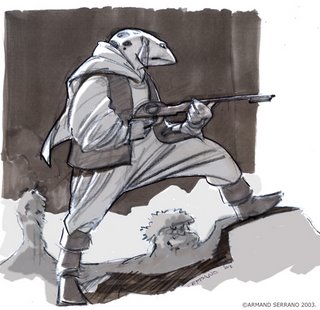 A few years ago at Disney, I was developing a story concept simply titled Lizard Troop. Due to some exciting announcements like shutting down the studio made me just abandon the project. But I did a few artworks for it that I saved. I pulled this one out (fig. 2). Since I'm on my down time this week, I decided to have fun and paint it (fig. 1). By the way, I just finished 'Surf's Up' (slated for 2007) last week and on to the next project. Work load will not kick in probably until the next few weeks. Anyway here's the finished product. It's a four hour sitting in Photoshop.
Posted by Armand Serrano at 1:50 AM

Oh man, I love the style of your work. Theirs such variety, its amazing. The Lizard troop project is a really facinating concept, to bad it will never see the light of day.

Way to go Armand! Great color approach to the sketch. Looking forward to what comes up during your "down time". ;)

WOW... What else can I say?
My jaw drops down to the floor every time I check either your blog or website. Thanks for the comments on my stuff, I really appreciate it. Receiving comments from great professionals such as yourself is what keeps me going, your artwork is really inspirational.
Thank you very much!

Wow Armand this looks awesome. I gotta learn how to paint stuff like this! Cool character and interesting environment. So now that you finished up on "Surfs Up" are you satisfied with it? I'm really looking forward to seeing it. I guess it's too early for you to tell what project you're starting next....or what?:D

This is awesome!! Love the concept design!

Woah ! - this I like . Armand thanks for linking . I'll do the same this evening . Really liking this .... . Love the style and the use of colour not to mention the damn fine drawing skill. Nothing like lizards with guns.....what's no to like ?

Excellent, thanks for showing us!

Ah-ha! So that's what you've been doing in your office! Down-time? What? All this time I thought you were working on Surf's Up!

All kidding aside, good going Armand!

I also wanted to publicly thank you for all your contributions to the Surf's Up project. Your work has been amazing, and your friendship has been equally as rewarding. Thanks brother!

I quite like the rendering and design. Nicely done.

Armand--I am a huge fan of your work!Thank you for the link, I have linked you as well!Also, This is a Beautiful sketch!:)

Oh my, thanks for all the comments my fellow bloggers. It's good to have a downtime once in a while in order to regroup and do some fun stuff of your own.

I appreciate the comment. Surf's Up was lots of fun and having a very talented friend like you around the whole time made it very rewarding as well. Now let's get ready for our story pitch!

How's Savannah? Hope to see pictures on your photo blog. To answer your question, yeah overall, i'm satisfied with it. Though there's still a few months to go in production and I'm still "on-call" in case there still some stuff to be added, I'd say the design is pretty solid. This assessment says so much about the cohesiveness of the creative crew led by production designer Paul Lasaine. Plus the basic concept of the movie is already working and solid right from day one. It was a fun-filled two and a half years for me.

I do like this guy !! He has those baggy MC Hammer pants on too ! :) 'It's Hammer Time !!'
Lizard men are one of my favourites next to Zombies and Space Vixens !

Gosh, you're right! now I can't get "Can't touch this" out of my head. Anyway, thanks for the comment.