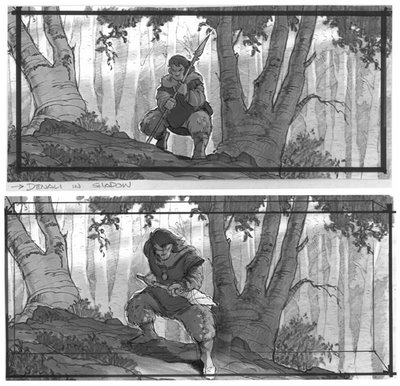 ©Disney
I continued sorting out my "archive" (actually boxes) this morning and finally found my Tarzan and Brother Bear artworks. Here is a couple of workbook panels from Brother Bear. This is the scene where Denali comes out of hiding and and about to attack the bear he's been hunting (which of course he didn't know that's his own brother Kenai). Designing birch trees in this movie was so much fun like this one having three trunks stemming out of one. For those of you studying composition, the idea is as soon as Denali steps out, camera follows him and makes a slight pull back. The tip of the spear and his foot start to come out of the shadow. I wanted Denali almost on the center of the screen (for a purpose) then framed him with two birch trees. Then I offset that frame towards the left of the main composition in order to create a more natural "feel" overall. I'll definitely include this sequence for my workbook series in a few weeks.
Posted by Armand Serrano at 10:40 AM

That's great! I am still trying improve my background compositions. I'll try to frame the picture and it always feels unnatural for some reason.

Superb! I really like this one and thanks for explaining your thought process. It's very educational and inspiring. I'd love to work more characters into my environments as well. It makes it much more complete and of course the story more specific.

Inspiring and educational. Always looking forward to seeing more of you're workbook drawings.

Thanks for the comment on my blog!I linking you to.:O)

Master of the Temple said...

Hi Armando, my name is Andrea from Milano. I was impressed by your drawings. I am an hobbyist and I would like to have your comment on the drawings I did and published on my blog. Many thanks and Best regards. Andrea

Thanks for the comment. I tried to access your profile to get to your blogsite and I can't. You have to change the settings on your profile so people can get through your site.