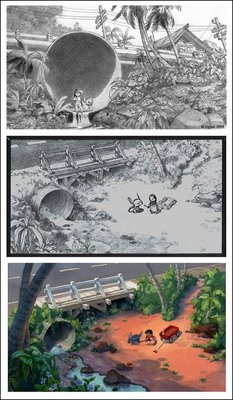 ©Disney
It was last March I believe that my good friend Marcelo posted on his blog about a development art he did of Lilo and Stitch standing in a culvert (fig. 1). He thought it never made it into the film. Well, it did. Back in 1999 right after working on Tarzan, I was being launched to work on Lilo and Stitch when I came across a development art that for me one of the few that really stood out - Lilo and Stitch in a culvert. It could be the scale of the culvert, the childish fun or both that attracted me to that artwork. Since the idea was not associated with any particular sequence it was put aside. But somehow I always had it at the back of my mind just waiting for the right moment for me to use the idea in my workbook. Then comes the perfect opportunity. I was asigned to do the workbook for an Elvis song sequence titled "Dysfunctional Angel". It's a series of events introducing the mischievousness of Stitch. On the opening shot for the sequence, Chris Sanders didn't suggest any location for the characters in his storyboard. It was even framed originally very tight on the characters. Then the culvert idea came back! I quickly designed the first shot on my workbook with the elements from Marcelo's but toning down a bit specially on the size of the culvert in order not to divert attention from the characters and even on the scale of the bridge in order to make it more "playskool"-ish. I took out the water drop from the concept art so it can just be painted and not be animated by efx anymore. By the way, Chris' character drawings on the storyboard has so much charm that I kept them in my workbook panel (fig. 2). Chris and Dean bought the idea and the design and eventually made it into the film (fig. 3). That was the one and only time the culvert was seen in the movie. In a small way, I hope that gave justice to a well thought and well designed concept art.
Posted by Armand Serrano at 12:27 AM

Wow, that looks great, fun to see the three different versions. How long does it take you to do a layout like this? sounds like you're very free to explore your own ideas. Are they open for new ideas or do you get a lot of direction you have to follow?

I draw my workbook panels almost the same size as storyboards. I try to keep them small yet big enough to have the important information clearly shown. The amount of time designing a shot varies from an hour to a day. I even had one workbook panel for Mulan that took me two days because of the complicated camera move that came with it. Workbook is fun because you're right, I get to explore ideas and camera mechanics in order to make storytelling strogger and more fluid. At that stage normally there's a lot of concept art been done to explore as well. Depending also on the amount of concept art and how well the storyboard was done, a sequence that's roughly 30-40 scenes takes about a month to finish. Have a great day Hans.

To answer your second question, Hans, -- on the sequences I get to workbook, I was given freedom for my own ideas so long I don't veer away so much from the storyboard. There're occasions when I had to add a scene or two but most of the time freedom was more on the design, composition and camera in order to strengten the storytelling on the boards. But if the directors have something very specific in mind for a shot, they often sketch it out for me and I just supply the necessary details.

Great stuff. Thank you for sharing. Workbook is one of those things no one really talks about . . .if you are outside of the feature relm. When does workbook take place and how many different people touch it? (I am sure it all depends, but I suppose the general time frames).

I saw your website a couple of years ago and was competely blown away . . .and now, WOW. You're quite a talent man, thank you for sharing your work and experiences.

Workbook is the stage in between storyboard and rough layout. As suppose to tv animation where you can just jump in from storyboard to layout, there's more additional considerations to plan for in feature film. A lot of future problems actually are being solved over in the workbook stage. Normally one journeyman will be assigned one whole sequence. But as always if the sequence is very long or complicated, it can be split up into two layout journeymen. Storytelling, composition, lighting, camera and props are already been thought of by the journeyman, with the directors in the workbook stage that it paves the way to a more solid creative production pipeline.