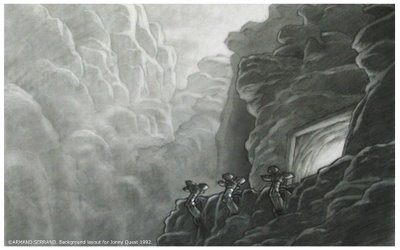 While working for Hanna Barbera at Fil-Cartoons Studios in Manila 16 years ago (oh my!), I had the privilege of being part of a lot of Saturday morning cartoons that I grew up with. The New Adventures Of Jonny Quest is one of my favorite. As you may know, they go to different exotic places on every episode of Jonny Quest. That show as well as a lot of TV cartoons have been a fantastic training ground for me as a layout artist. The turnover of each episode was so quick (every month or two the most). So we have to crank up the speed in thinking, research and drawing without losing the quality as much as possible. This bg layout was one of the very few ones that I kept from that show. I believe the original layout was done in 1992. Then I fixed the rendering on it around 1995-1996 to be added on my portfolio while applying for feature animation studios. There's nothing really much going on in this layout. But I like how I played with the light and how it turned out. An epic scale was created on a very simple shot. Again, if my memory serves me well, this is supposed to be some kind of a landing pad for a secret underground facility for that episode. This was done with black prismacolor on soft medium weight vellum.
Posted by Armand Serrano at 2:20 PM

I don't know how you do it. Your work is just amazing and your skills are extraordinary. Thank you very much for the inspiration!

Do you ever use 4B pencils on your value study lay outs? They look great. Also those Mulan drawings are fantastic. Book Marked.