Cloudy With A Chance Of Meatballs 2: Designing the Roofless Restaurant, Spaghetti Twister, and Eiffel Tower

The Roofless was originally named Ralph's Roofless Restaurant (see if you can say that fast). The idea actually originated from the book. Since food falls from the sky, the restaurant sells utensils. I designed the interior with The Standard in LA in mind showcasing different utensils all around the place. The brightly lit tables somehow are paying homage to the legendary layout tables we used back in the days of 2D animation. 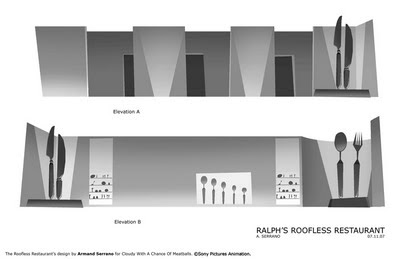 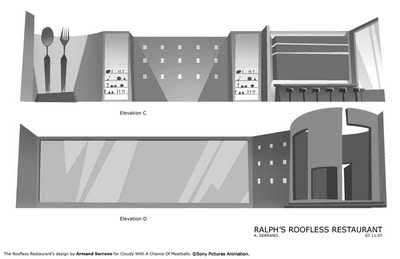 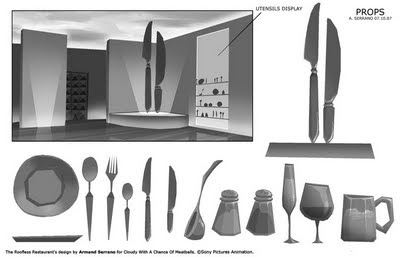 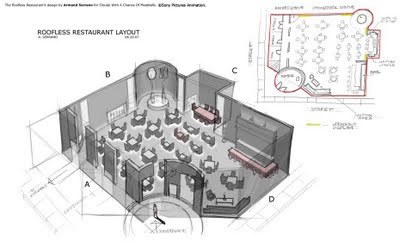 Below is my earliest design for the interior which was a quick thumbnail in PS having a bright colorful palette. 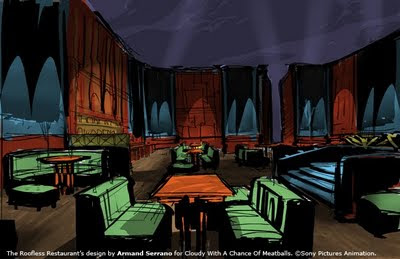 Here's an early concept design of the spaghetti tornado I did wrecking down the sardine cannery. Below are screen grabs of a 3D test with an animated spaghetti twister which I "retouched" to add a new NY skyline layout. 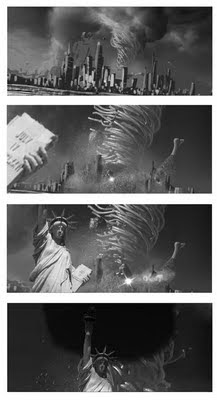 Here are the actual artworks I did based from that test above.

The design of the New York skyline was based from the artist Miroslav Sasek's style (remember the "This Is" childrens' book series) in his which we were alluding to early on in visual development. Same goes with Liberty. I noticed that his artworks has a slight general lean to the right meaning he's left handed. So I did the same. Kinda cool and added personality.

These are very early concept designs that show the tower covered with pizza as well as the clouds. I designed these clouds with those tube-like formations where food supposedly would fall out from, and tendrils for fear factor. I made these tree studies thinking they might be useful for the same environment using Sasek's sensibilities but in a 3D volumetric form. 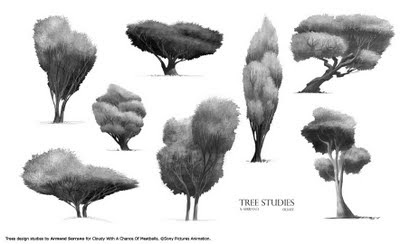 Still more to come next week...

Labels: Cloudy With A Chance Of Meatballs

Armand, Thanks so much for posting these. It's a great behind-the-scenes look into the visdev process. I recently saw the "art of" book for Meatballs. THICK. You and your dept. did an amazing job. Can't wait to take my kids to see it.

Whoa Armand, your blogging is out of control!:)

Keep it coming, it's a pleasure to read about and of course to see your awesome artwork. I haven't had a chance to see it yet, but I'm very much looking forward to it this weekend.

wow dude. that stuff is amazing. i don't even understand how you can do some of that stuff. the trees are my favorite. interesting shapes, nice rendering.

woah, brain's overloaded, this is going to take a while to settle. Amazing. Thanks so much for sharing, I love seeing how much planning goes into a production. :]

Cool stuff - it must've been fun to throw food over all of these famous places.

Great work!
Looking forward for the next update!

All the best,
Mariusz

Great so see all the conceptual arts!! LOve the movie!! And the design ROCK!

these are just gorgeous. great work. cant wait to pick up the ART of book.

Wonderful designs -thanks for sharing!

Man I saw this movie 3 times so far- I love it! congrats on the movie, and amazing work!

That tornado looks so good!

Thanks again for the comments and support. Glad you guys enjoyed the movie.

Unconventional women don't ed hardy often fit into more ed hardy shoes conventional sizes. Instead, they are ed hardy clothing faced with the challenge of finding comfortable ed hardy clothes and stylish plus size women's clothing. By and large, most ed hardy store store refuse to stock sizes in ed hardy Bikini excess of a size 14 ed hardy swimsuits or 16. This means they have ed hardy Caps to find the clothes they need in specialty buy ed hardy store that can be very expensive. What then ed hardy swimwear is a plus size ed hardy sale woman to do? She has to do ed hardy glasses her research and find the cheap ed hardy places, both online and Christian audigier off, that will accommodate her wardrobe.

For those of you who are purchasing Crystal Jewellery,we realize that this is one of the most important purchasing decisions you will make.

Sunglasses are called 1 from the most effective and alluring equipment for equally men and women.Ray Ban 3190 sunglasses have built its first visual appeal about 80 ages ago and develop into a hitting solution within the sector promptly. These Ray Ban 3386 sunglasses are specialized in blocking glares and lots of other harmful rays.Within a phrase, Ray Ban 4120 sunglasses are combo of vision defense and style. That is why they may be so well-liked and warm the many much more.