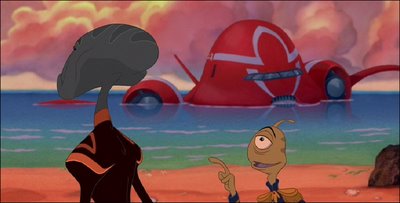 The artwork I have here (fig. 1) is when the 747 already landed and settled on the beach. It was a key backgound layout for the beach sequence with the aliens. The second one (fig. 2) is a screen grab from that sequence.
Posted by Armand Serrano at 10:51 PM

Absolutely beautiful work Armand! Your work is so inspiring, thanks for reminding me how amazing art can be.

Thanks for posting this Armand. Beautifull work !! Both Krista and i were working on scenes from this sequence the morning of the tragic tower hits.We both had tv's at our desk and i will never forget the sadness of that day.Surreal.

That's awesome! The lighting and the sky is just amazing. I think I've seen this one before, is it in the "art of" book or something?
About my music, I posted a link to it on my blog, so please don't hesitate to stop by and have a listen:). It's my first orchestral/cinematic peace and I had a great time working on it. Still needs a little tweaking here and there though.

I know, Kevin. I will never forget that morning, too. Absolutely surreal.

Thanks for the comment, what a nice motivation to get started on the next piece:) I'm definitely interested in your project and would love to hear more about it.
That's great you're coming to FL this christmas. I'm probably not going to Denmark this year, so if you can free up an hour or two, we could go get a beer or something.

coool story!! Love that top piece, thanks for sharing this!

I've seen this sequence as it was conceived, in the "lilo and stitch" special edition dvd from UK! Good to read about it here!

Thaks for sharing your artwork, its incredible!