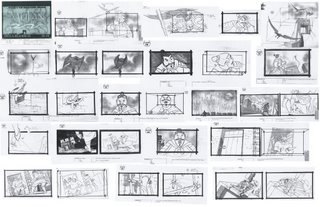 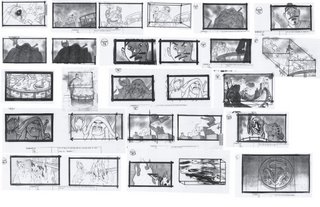 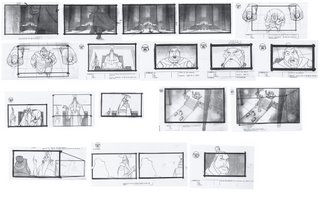 ©Disney
Though it's the prologue for the movie, Mulans first sequence where the Huns attacked the Great Wall was actually one of the last sequences to be done in workbook. There were two versions and I had the privilege on doing both. It was the second one that ended up on the big screen. Our production designer Hans Bacher wasn't so happy on this decision and in a way I agree with him. But the product turned out really well on the screen and probably one of my favorite start in an animated movie. Here is the version that made it to theatrical release and the first installment in my blog's new workbook series.
Posted by Armand Serrano at 5:36 PM

Hey Armand--
that's very exciting;
I very much look forward to your series.

Thanks, Nick. Im excited as well for I haven't seen these drawings of mine for a long time.

I really enjoy seeing these behind-the-scenes stuff. Thanks for sharing.

Beautiful man. So crystal clear . . .impressive staging as well. Nice down 3/4 shots and tilted camera angles. IMPRESSIVE. This was actually a nice film, at least in my opinion. Thank you for sharing.

wow, these are really great. Can learn a lot just by looking at them:) So when you're doing the workbook, you're pretty much taking the storyboard to the next level or what?

That's partly the idea. Taking it to the next level in such a way that all the aspects of layout (composition, lighting, camera, character size relationship and poses, etc.) were taken into consideration without losing (or better, improving) the the overall gest of the storyboard.

the opening version we had planned first was in my oppinion a much better way to introduce the audience into this mysterious old chinese world. I had sketched that opening very early in the production. very much like the later used brush-title blossoms were falling, the camera panned until the blossoms hit water. only the water rings indicated that because everything was animated black brush line on light rice paper. the camera followed the turning blossoms on the water, bamboo leaves moved in, pan up, swallows, hills showed in the background. grass came in moving in the foreground and slowly color was introduced. finally mulan was riding on her horse into the field - and so
on. opposite to the action opening that we used a very lyrical start that had given us a chance to introduce the culture in painting and music. anyway - it worked the other way well too...
hans