From Jedi to Gladiator 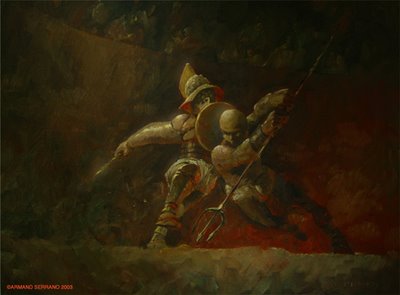 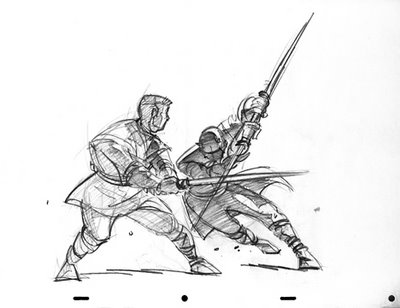 ©Armand Serrano.
Back in 2001, I gave a talk at my kids school about animation. My daughter's classmates asked me to draw something Star Wars for them. So I did this quick sketch of Obi Wan and Darth Maul in a duel. I made copies and gave them to everyone in the class. Later, I was asked to join a union exhibit at the Orlando Museum of Art and my son proded me to paint that sketch. A Jedi duel was not exactly what I had in mind but I didn't want my son to feel bad either. So I compromised. I took the pose from the duel and turned them into gladiators in the arena. We both ended up happy with the result. I titled the artwork "Secutor and Retiarius". These are two different types of gladiators. A Secutor is known for it's fighting move which is to chase the opponent. It has a wide round helment with tiny eye holes. He wears either a leather or metal bands on his right arm and carries a short sword called the gladius. He also has a shield and leg guard. A Retiarius on the other hand is literally translated as the "net man" or a fisherman. He uses a trident and a net to catch and fight the opponent. Sometimes they use a neck guard and fights completely naked (don't want to be on that side!). This combination is a favorite in the arena. Anyway, the artwork made it to the exhibit together with two other gladiator paintings. This was done in oil on 22"x26" canvas (photo was enhanced in photoshop).
Posted by Armand Serrano at 11:56 AM

WOW!!! COoolio!! Love the action and moment in these drawing and painting!!

That's a great one. Love to see more like that. Nice to see both sides of it.

So good. Lots of action, and that red just glows.

Oh my goodness. I think it's absolutely beautiful. It really feels like a moment frozen right in the middle of action. And those -colours-! They practically glow - they remind me of a mixture of Velasquez and Waterhouse. I'll just sit here, look at that and purr happily for the next hour now while I wrestle with Art Practice. And getting to watch the entire process from sketch to painting is such a treat!

These are both superb ! Love the Gladiator piccy !

Hmmmm. just 'cause the amount of informations and knowledge you have in this matter(on gladiators), I promise to you that next time I will be back home in Rome, I will try my best so you can have an honorarium citizenship or min a metal "plaque" (brass) with your name on it at the Colosseum!!! :)
Just kidding.. lovely work like always.
Thank you for share.
Angelo